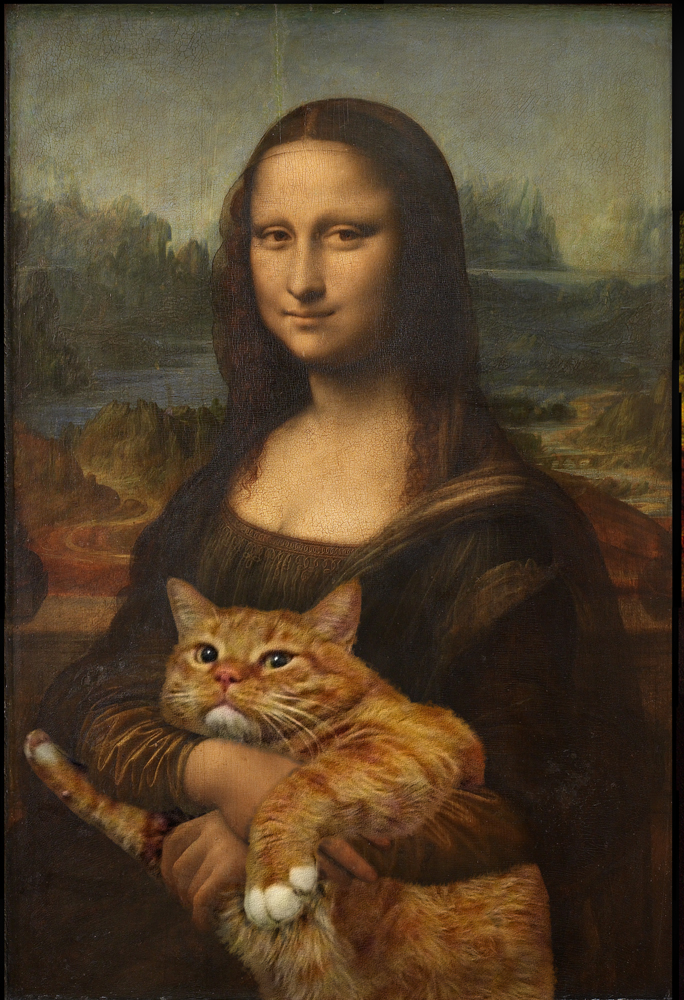 Mona Lisa’s smile is a mystery no more.
She smiled because We were there. Let you have on your knees 10 kilos of the immeasurable grandeur and have no smile.
Afterward, Leonardo reluctantly painted out Our image. He was afraid of the reaction of the art critics and gallerists who were normally treating the pictures with cats as not serious.
But the smile of Mona Lisa remained on the painting.
That is the true story.

P.S. IMPORTANT UPDATE!
After long efforts, We restored the original look of Mona Lisa’s true version. We removed the old varnish from the painting to the possible extent.  Leonardo used the glazing technique: he applied layers of thinnest semi-transparent glaze (a mixture of pigment and oil) to the painting’s surface. Leonardo da Vinci began painting the Mona Lisa about 1503, the year We visited him. But it was still in his studio when he passed away in 1519. Can you imagine how many layers of paint he put on his masterpiece? The light fog on the mountains, Mona Lisa’s transparent veil, her tender skin, and her hair, and Our magnificent fur, all these took years of persistence, patience, and skill. Then the picture was covered with a varnish that got old with time and obscured and yellowed the picture. It’s impossible to remove it just because of the chemical components of varnish are too close to the glazing oil, and the risk of removing a painting layer is too strong. Already it happened once: during its initial restoration in 1809, the Mona Lisa’s top layer of paint was destroyed, causing the artwork to appear more washed out than da Vinci had painted it. But what is not possible for museum restorators, is possible for Zarathustra the Great: 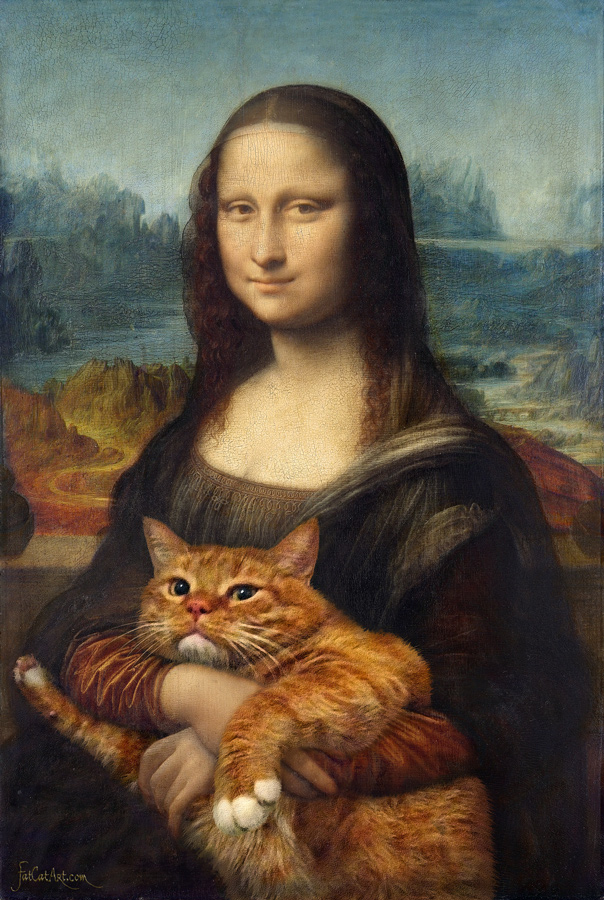 We left just a little bit of old varnish, to keep the top layer of the painting safe. Now you can see what is not visible in the Louvre museum: blue mountains, red sleeves of Mona’s dress, and of course, the ginger cat. Enjoy!

You can even purrchase the meowsterpiece, for your precious self, as a CANVAS PRINT or as a POSTER

Happily she finished it in several months, not years, just because kind people came to take it far away from her in order to prevent her applying infinite layers of glaze with her brush instead of brushing Our purrecious Majesty.
Thus speaks again Zarathustra the Cat