Ready for the Cat

Everything is ready for you – that is the life style of those chosen ones who are named “domestic cats”. With the help of our humans everything around us is ready for our enjoy. This nice tendency was noticed by Marcel Duchamp, who declared a new kind of art pieces – ready-maid. The most usual objects as a bycicle wheel or even an urinal being signed by artist and put in the new context – a museum for exemple – became pieces of art. The same thing happens whis the classic masterpieces when they are improved by something good as cats and moustaches – the new piece of art appears: 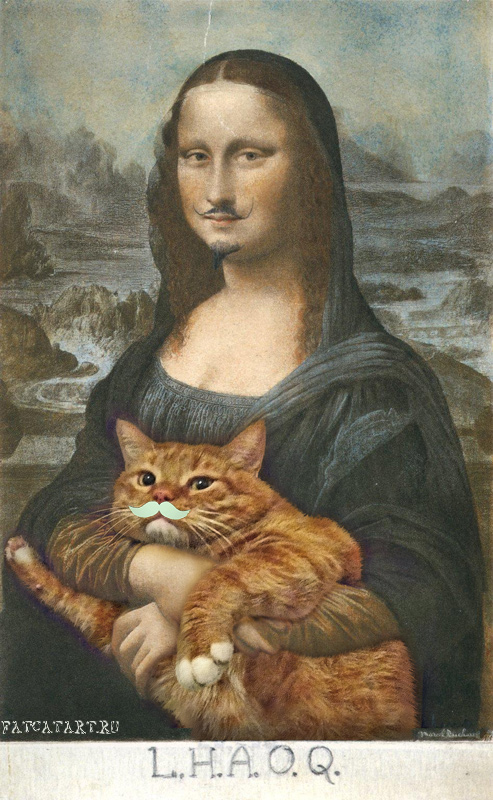 In 1919 Marcel Duchamp took a cheap postcard with Joconde, drew onto it  a moustache and beard in pencil and appended the title L.H.A.O.Q – the letters when pronounced in French form the sentence “Elle a chaud au cul”, which can be translated as “She has a hot in the ass”. The masculinized female introduces the theme of gender reversal, which was popular with Duchamp.
Nobody knows that he had also a postcard of the original Mona Lisa, and also drew on it a moustache, glued a paper moustache onto the cat’s image and titled it L.H.A.O.Q – “Elle a chat au cul”, which can be translated as “She has a pussy in the ass” that has evidently much more reference to gender reversal.
Having seen that, art-criticists used to ask Marcel: “Is that art?!” And he used to reply: “Yes, yes” in Russian: “Da, da”. that is why this art-movement is called “dadaism” or simply “dada”.
L.H.O.O.Q. was sold for $607 500 on 13, May 1999 at Christie’s auction in New York. We are so kind to think about selling Ours L.H.A.O.Q at the auction for the cats sake. Who will give better price?