Progressive humanity cannot doubt this saying, but We, Zarathustra the Cat, decided to demonstrate it once again. We restored the original look of the famous group of angels at the bottom edge of the Sistine Madonna painting by Raphael: 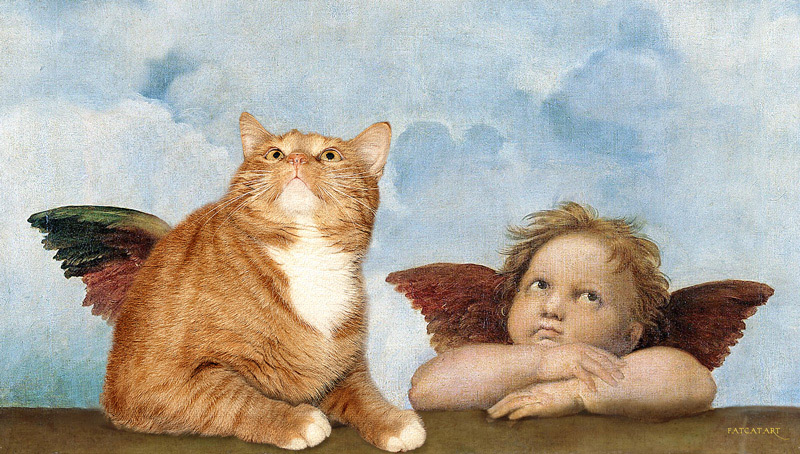 The winged cherubs from the painting are famous in their own right. Last two centuries they made an extraordinary career in advertising and mass culture, making an appearance in stamps, postcards, t-shirts, wrapping paper, they served as promotion for a variety of “heavenly joys” of earthen goods such as coffee, chocolate, stamps or even pork! All this happened because of their vivid childish look. The story told in one magazine in 1912 says that Raphael was inspired by two kids he encountered on the street when he saw them looking wistfully into the window of a food shop. So a presence of a cat in this scene is more than natural.

Raphael wanted to make some lively cute detail at the very serious painting, so he featured a boy and a cat, who looked like if they were looking for food and meaning of life.

Appreciating the whole compositing, one can easily notice that now it is easy to understand what St. Barbara is actually looking at: 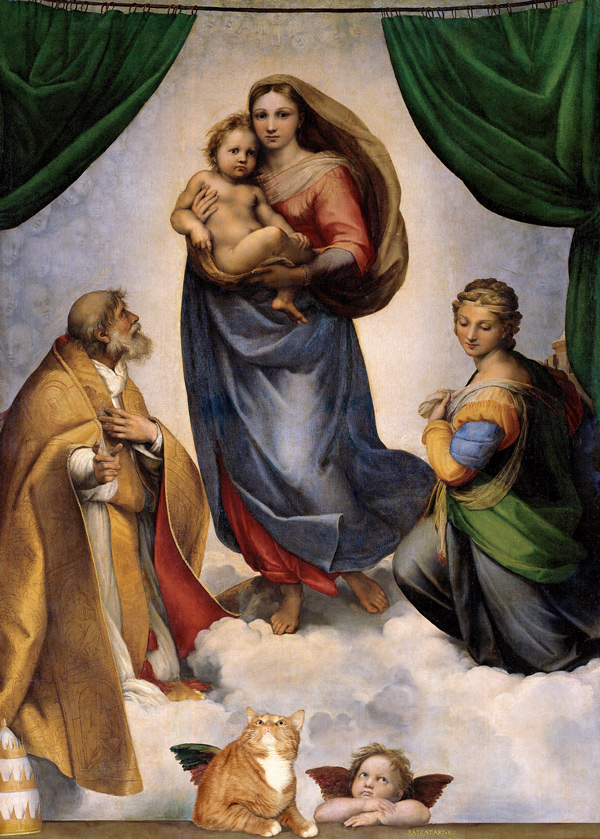 Raphael, Sistine Madonna, with the Group of Angel and Cat

Of course, art-critics of the days forced the great master to paint the cat over: street children are more or less OK, but not cats! It was treated as not serious.

Putti, chubby male children, usually nude and sometimes winged, as cherubs and cupids, are very known in the art of Renaissance and Baroque, you can find it in so many paintings. Our challenge is to check if there were cats hidden behind them? In fact, the images of little angels and cupids had the same function in paintings as kitten pictures in social networks nowadays: they served to make cute overload!

At this positive moment We wish humanity to celebrate Russian Christmas and Russian Old New Year, that is 2 weeks later than in other places, according to Julian calendar.

Go and kiss your cat in its nose, because your cat is an angel.

BUY THIS IMAGE AS A CANVAS PRINT OR AS A POSTER