Today We, Zarathustra the Cat, would like to offer to our audience a theme for discussion:
Is the artist allowed to kill animals for the sake of Art? And do we, not human beings, have a chance to join the beautiful staying alive.

Recently one of the most popular now living artists Damien Hirst who is famous for his mind-blowing artworks dediсated to death announced a competition for young artists: the best artwork based on Damien Hirst’s exploration of life and death. It would seem to be a fortune for Us, Zarathustra, the Cat, who Improves famous Paintings.

But firstly cats have neither passports nor Qatar visas, which are obligatory for participation in «Damien Hirst Challenge» – the competition was confined to the huge exhibition which was held recently.

Secondly, the main prize is absolutely not attractive to Us – to meet the artist in person and become an assistant in creation of one of his artworks. For Us, cats, it is too risky. We don’t want to follow in numerous animals: sharks, cows, sheeps and even pigeons, footsteps. Poor creatures served Damien as objects of art and got directly into formaldehyde. Therefore We decided to take part remotely by representing in our blog an artwork “The Physical Impossibility of Falling Down in the Mind of Someone Sleeping on Damien Hirst’s installation “The Physical Impossibility of Death in the Mind of Someone Living””. The original artwork, which made Damien famous in 1991, is a kind of fish soup cooked from the four-meter long shark in formaldehyde instead of broth. We, cats, naturally want to be closer to the fish. 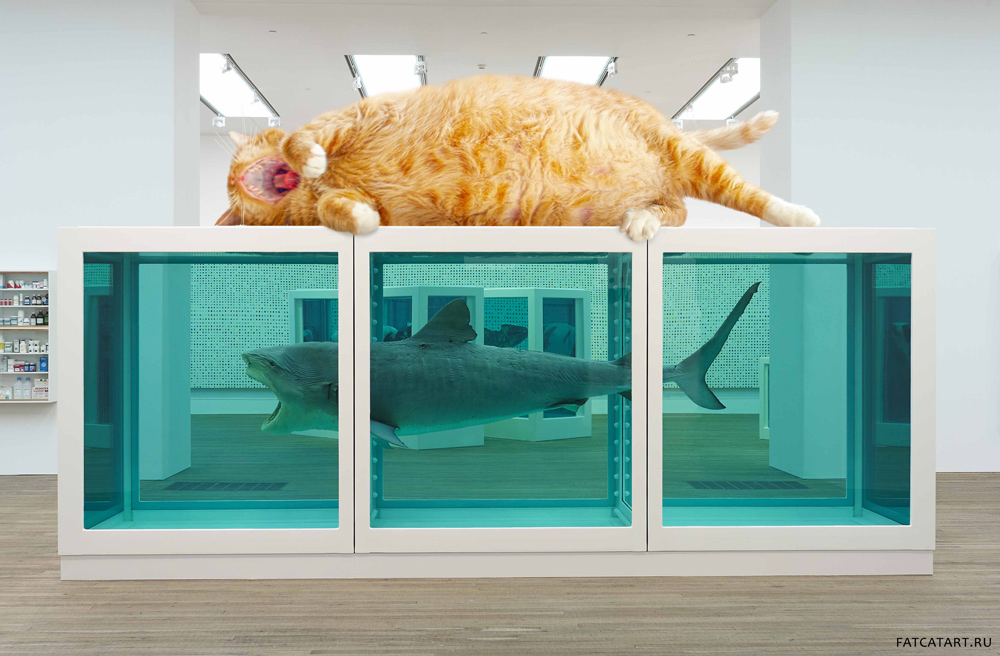 Moreover, exhibition halls are always warm and dry… and here We are, having a nap on the aquarium with the shark, a very comfortable place providing a complete overview of the surroundings. When art curators and critics, who, as We know, forced Leonardo to paint over the Cat on the Mona Lisa portrait, noticed Us having Our noble nap, they thought it was Damien Hirst’s decision to add alive cat to his artwork.

“It’s an outrage! Damien, It is against the concept! There is no chance to sell something this way! – they said. Kill Him! Kill!” The artist tried to explain himself, but failed to withstand the pressure and said: “Ok, I’ll wash my hands first…”. We were woken up by all this noise and while falling down from the aquarium We realized that this aquarium is something similar to Schrödinger box, which is not a proper place for a cat. That’s why it is a lonely shark inside the aquarium filled with formaldehyde. As to the Cat, he may be in his quantum superposition, on top of the aquarium, under the aquarium and running away from the aquarium.

That is the kind of life-affirming artwork We created basing on Damien Hirst’s art. We really hope that the artist will see it, will be admired by it and offer an alternative prize to Us. We agree to receive the diamond skull as soon as no one was hurt for the sake of its creation.

To the credit of the serial killer of predatory fishes and innocent creatures, Damien has never injured The Cats or dogs. That’s why We dared to imagine a dialog between Us and the creator:

Zarathustra The Cat: Dear human Damien Hirst, it seems to Us kinda not very nice to kill innocent creatures and make them objects of art! It is just cruel!
DH: Dear Zarathustra the Cat, what’s so bad about it? You, cats also kill lots of innocent creatures: birds, fishes, not to mention all the insects which you, dear Zarathustra the Cat, have caught during your life. I’m sure, enough to assist me in the creation of my Entomology Paintings.
ZC: We, the cats, kill for vital necessity and you people turn murder into art.
DH: Oh, dear Zarathustra the Cat, I also kill out of vital necessity: who would buy my art if animals remained alive?  How would I pay for my food and diamonds which are so necessary for the decoration of skulls, huh?

You may think: Dearest Zarathustra, these are just fruits of the Cat’s imagination, the world of contemporary art is not so materialistic and bloodthirsty! However, Our cat’s intuition didn’t disappoint Us: recently We found out that in 2008 one British family tried to sell on Sotheby’s a portrait of their cat Mindy drawn in 1982 by Mr. Hirst. 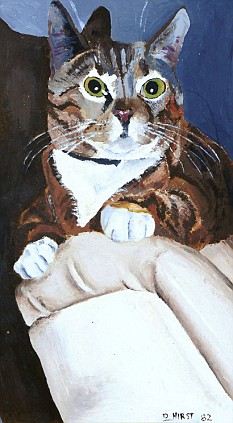 Portrait of Mindy the Cat by Damien Hirst. One can see artist’s signature and date at the bottom right

They were told that the picture worth nothing as far as it wasn’t made in the style which made Hirst famous – the сat managed to survive instead of being sawn in half and suspended in formaldehyde! Just to compare, his another early work –a painting of pickled fish – was sold the same year for the substantial price. It seems that art-professionals’ logic was: the fish is dead, pickle is similar to formaldehyde. That’s good enough!
The owners of the Mindy the Cat portrait shared the tragicomic story of the painting:

Can it be true that Damien Hirst is the Cat lover, who kills his victims for vital necessity at the same time (and of course for diamonds, no one is perfect)?
Does the art market provoke killing animals? Is death the only possible way for animals to immortalize themselves in contemporary art? 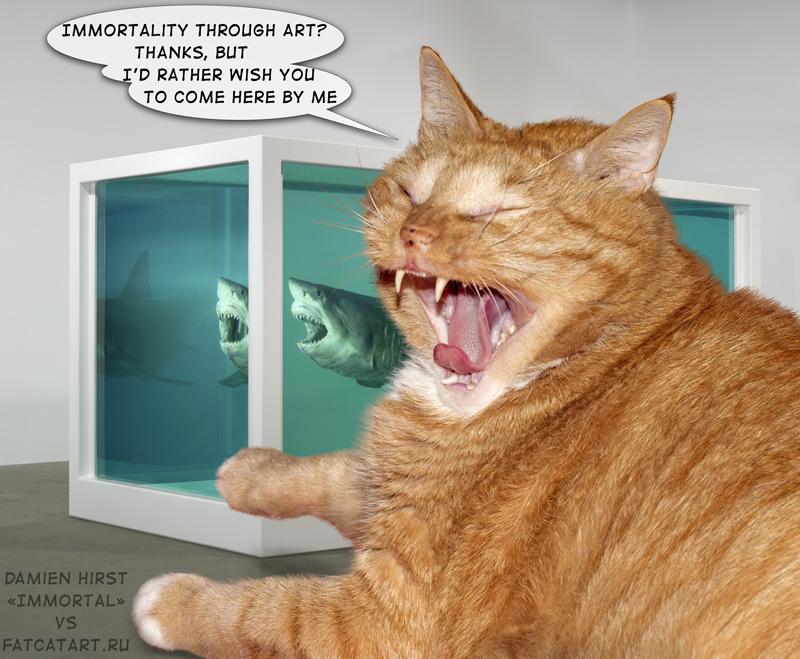 We are distressed: now other creators, seeking for diamonds and food, are aware that murder is a reliable way to the fame as painting. And it is much easier to kill an innocent creature than to draw it.
And some human artists even dare to kill their friends – cats and dogs!
And We are concerned if some human artist would kill some human, that is so natural for humans to make animal tests of their stuff for themselves…

That’s how cruel contemporary art is. And even art in general! Artist, remember, when you pick up a brush, squirrel or Siberian weasel, an innocent creature gave its life for it. For the sake of respect to it, do not dare to draw crap!

What do you think, Our dear friends? Is it acceptable to kill animals for the sake of art? to use their skins and bodies for installations? their furs and feathers in the art of fashion? Can killing of innocent creatures be justified by beauty, concepts, or self-expression of the artist?