The Bayeux Tapestry – the true reason of the Norman conquest of England revealed!

There is a common belief that Middle Ages were not favourable to cats because they were supposed to be friends of the devil. It is not true!
Cats were also worshiped during Middle Ages, but in an esoteric way. Medieval people loved secrets, you know.

Here We are going to reveal one of these hidden moments from the cult of cats of the time – the mystery behind the 23rd scene of the Bayeux Tapestry – a very popular medieval comic strip embroidered on 70 metres (230 ft) long linen canvas. The scene depicts an event that finally led to the Norman invasion of England.

The captions say: HAROLD SACRAMENTUM FECIT WILLELMO DUCI – Harold made an oath to Duke William.
But what oath? – nobody actually knows!  The only thing that is clear: Harold didn’t fulfil his promise, and the result was more than sad for him.
Here We show what really happened there – and what was embroidered initially on the canvas: 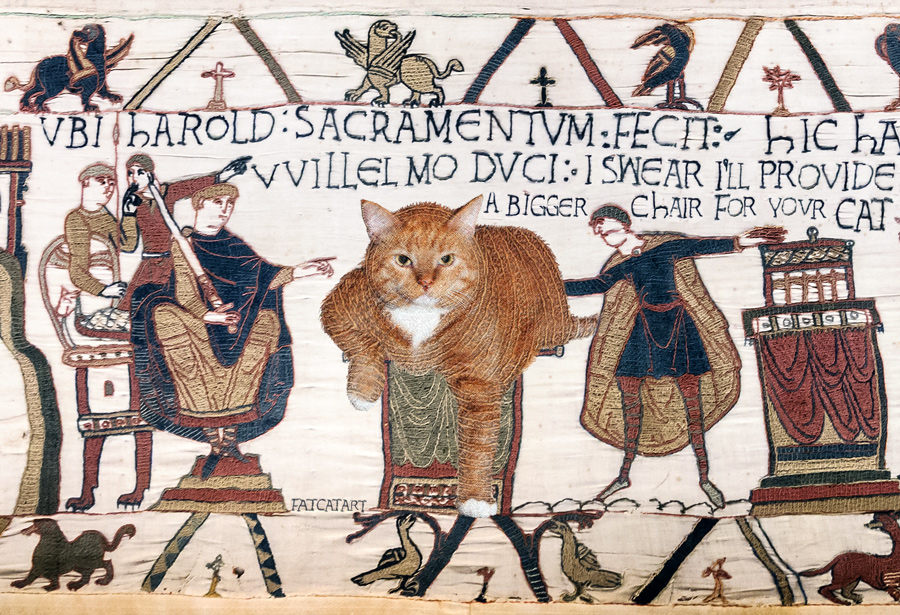 Harold brought to Duke William an armchair that his beloved cat found unbearably small.
That is why everybody is evidently upset at the scene, discussing what to do and why Harold was so stupid to buy such a tiny chair for such a large cat.
After examining his mistake Harold exclaimed to William: “I swear I will provide a bigger chair for you cat”!
But he did not.
The rest you already know: Halley’s comet was seen in the sky. The Normans invaded England. William became the Conqueror.

The moral of this story:
You’d better provide all necessary stuff for your cat in good time.
Especially you should respect the schedule in delivering food.
Remember about Halley’s Comet at the Battle of Hastings!

P.S. This true version of the Bayeux Tapestry’s 23 scene was for the first time revieled in Our book:
Fat Cat Art: Famous Masterpieces Improved by a Ginger Cat with Attitude

Do you and your cat and art loving friends have it already?