We, Zarathustra the Cat, are so proud to present to the public worldwide “Catboom! The movie”, the ultimate result of the project in collaboration cats and humans in the art that began in 2013. Now you see that Our movie “Sunset Boulevard II” was initially the part of the bigger picture:

Thirty-six cats and twenty-five humans united to create this artistic investigation of the phenomenon of cats’ popularity on the Internet. The story of the project is rather thrilling:

At the end of 2013, Multivision Festival of animated shorts, curated by Our humble assistant in St.Petersburg, Russia, invited French film director Nieto, famous for his hilarious surrealistic movies about animals, to make a workshop for local students and young professionals in filmmaking and theater. The task of the workshop was to create a new video installation: a surrealistic video sequence projected in 3D mapping technique onto the not less surrealistic sculpture. At this point, We intervened in this human, all too human plan, and suggested that the theme of the project would be the popularity of cats on the Internet and that We need a lot of Our beloved brothers and sister cats to star in this video. We also promised, after the creation of the video installation would be finished, to take all the cat actors into famous movies and make “Catboom! The movie” that you watch now. It is the part of our project “Famous movies improved by cats”

In order to attract cat performers for «Catboom», Multivision Festival launched a casting campaign, with over 1000 of Saint-Petersburg cats participating, including some prominent feline personas: residents of the first cat cafe in Europe, “Cats Republic” (the branch «Cats Museum»), alongside with some famous Hermitage cats. Anybody could submit his cat at the casting, and so did more than thousand of human slaves! Finally, 35 cats were selected, and Our Majesty also made Our highly professional appearance. We, cats, were assisted by 25 humans. The casting and making-of process became themselves entertaining performances investigating creativity in the age of viral reality.

«Catboom!» as a video sculpture was premiered at Multivision’s «Motion of image and image of motion» exhibition in the Museum of Contemporary Art «Erarta» in November 2013. Then it was donated to Sergey Kuryokhin Contemporary Art Museum, and now makes part of its permanent collection. Here is how it looks like:

“Catboom!” the movie took more time to make, and finally the part of it was premiered to the public in St.Petersburg, on the huge 400 sq.m. screen attached to the surface of the erected part of Trinity drawbridge during the summer outdoor event of the Multivision Festival 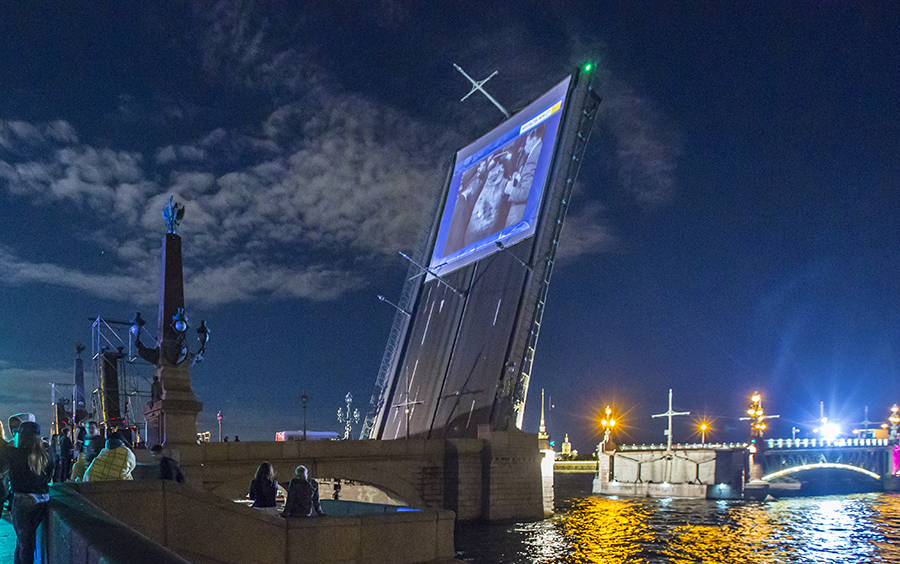 And today We premiere it worldwide in full version!

Full credits of the artwork:

Here is one of the making of photos, the full album is here

You can see, how it was hilarious!

And remember, We can come to your city and make “Catboom!” there! Just ask your cultural institutions to invite us!