The saddest news: our dearest Zarathustra finished his way in his physical body and returned to his home immortal digital world at the end of 16.12.2021 at the age of 16. 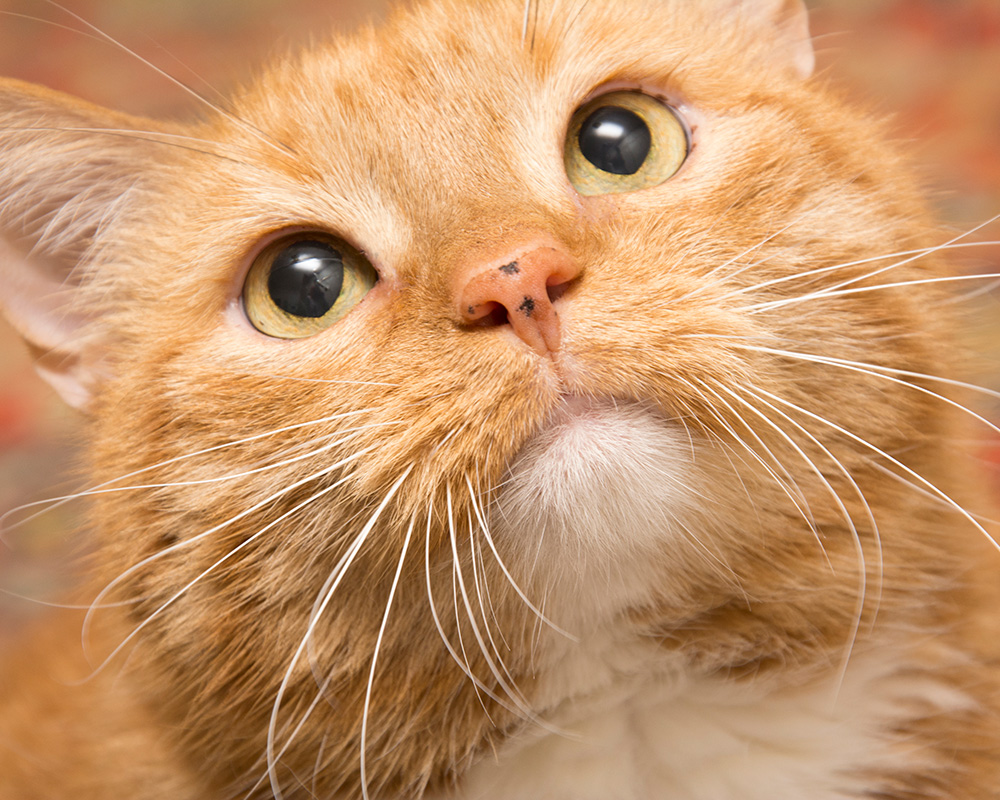 Zarathustra the Cat, the most beautiful and clever cat in the world

His was seriously ill, and his little heart didn’t make it, though it seemed to me that hope appeared and that we could break through. But the damage caused by pancreatitis and subsequent peritonitis was too massive…
It happened an hour after I wrote the update about his health on FB and IG . I fed Zarathustra by syringe, he showed interest in the food, and I thought he would eat by himself next time. I brought him water and went out to the kitchen to fry eggs for myself, put butter on the pan, and decided to check Z while it was melting. Z just dropped his head near the water bowl; I seized him and caught his last sigh… He was smiling and looked at me with loving eyes while falling into the deep, deep sky….. I tried to blow air in his mouth and nose, did heart massage, but I couldn’t reanimate him…
I was absolutely ruined. I am so thankful to our vet Lubov Rudnitskaya, who supported me immediately after Zarathustra’s death, and to my kind friends Teresa, Alyona, Dmitry, and Oxana, who came to me that awful night to say goodbye to the great cat and grieve with me.
Zarathustra’s ashes will be buried in my mother’s grave. 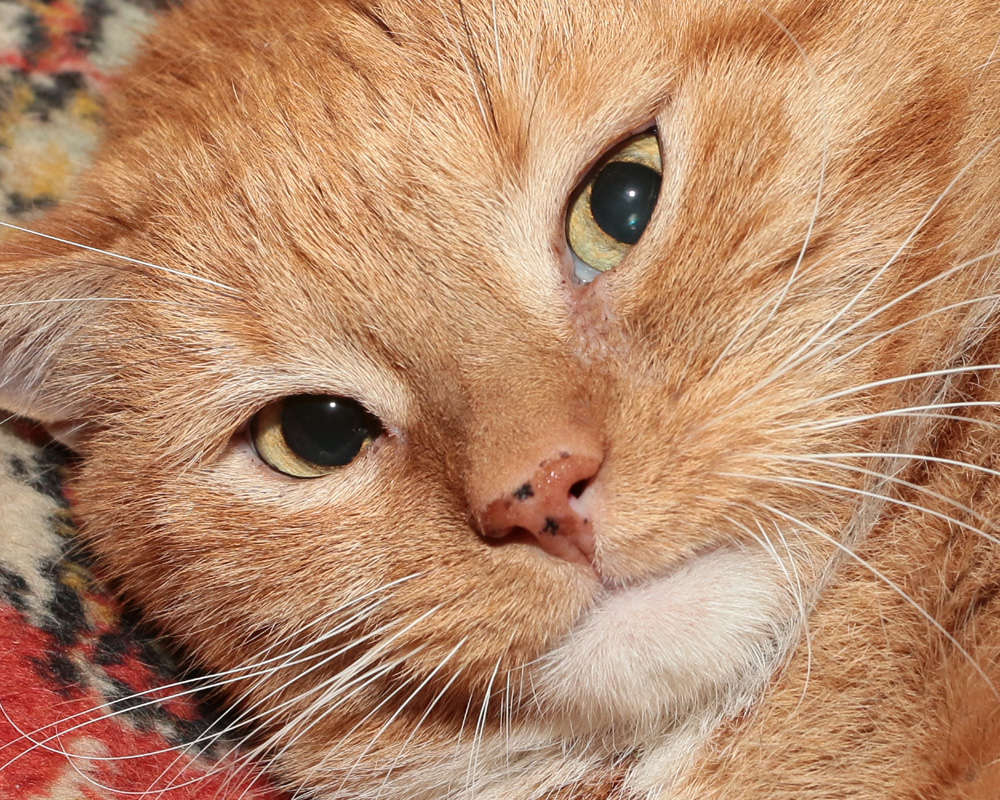 Zarathustra the Cat, his lovely face

When my mom passed away, it was Zarathustra who saved me from depression. I know he doesn’t want I sank in sadness now when he went away. 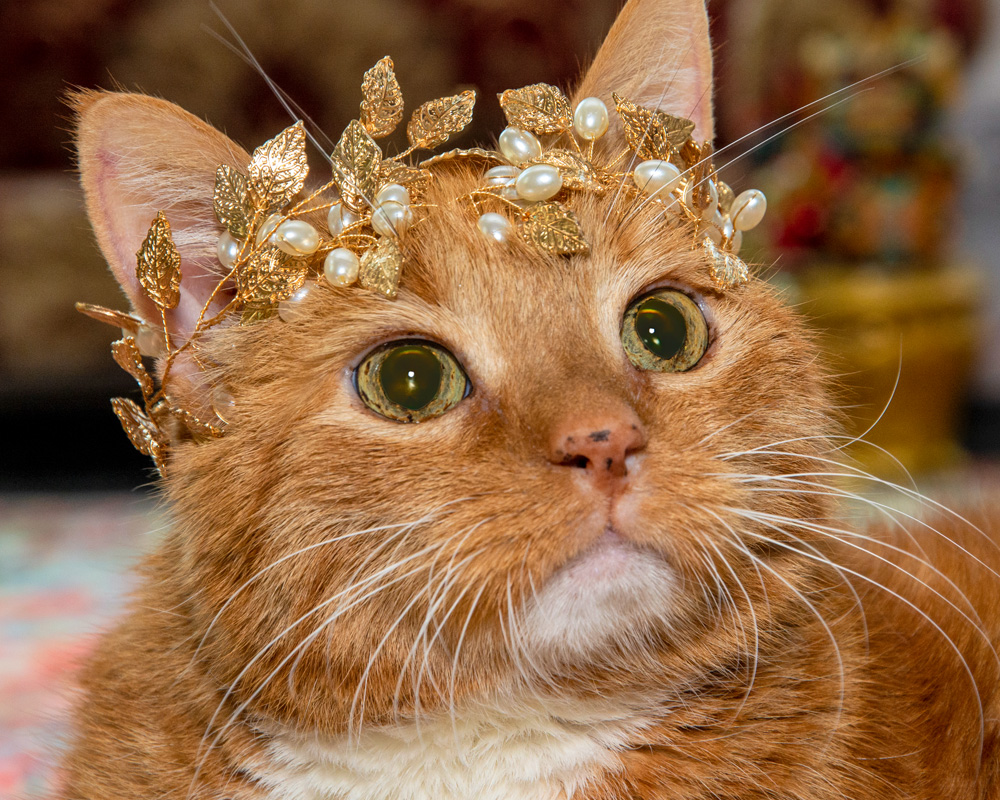 Zarathustra the Cat, in all his glory

And, surrounded by his painting, wallpapers, and tiles in my flat, I don’t feel he’s gone. I feel him embracing me with all this art and see him flying on the light at the ceiling of my kitchen. 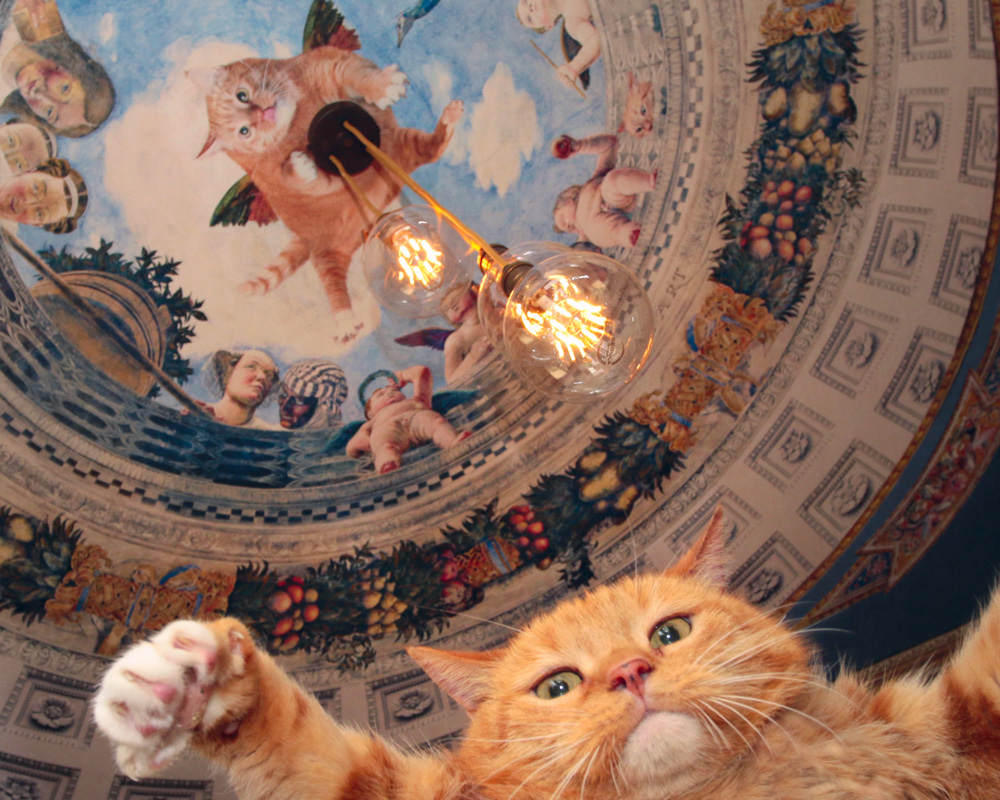 Zarathustra the Cat waves before the ceiling fresco “Andrea Mantegna, Oculus” in his flat 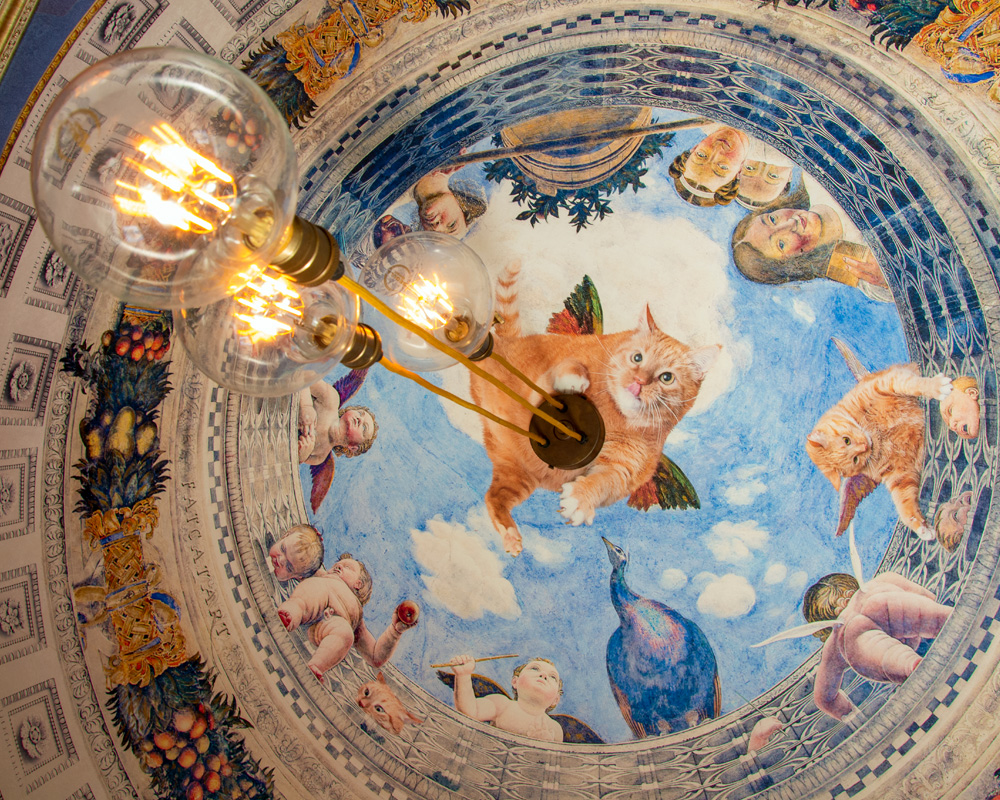 Ceiling fresco “Andrea Mantegna, Oculus” in the kitchen in our flat

I just cannot touch him anymore, listen to his voice, look into his eyes, and it hurts so much. But his presence in art is glorious, and art never dies. 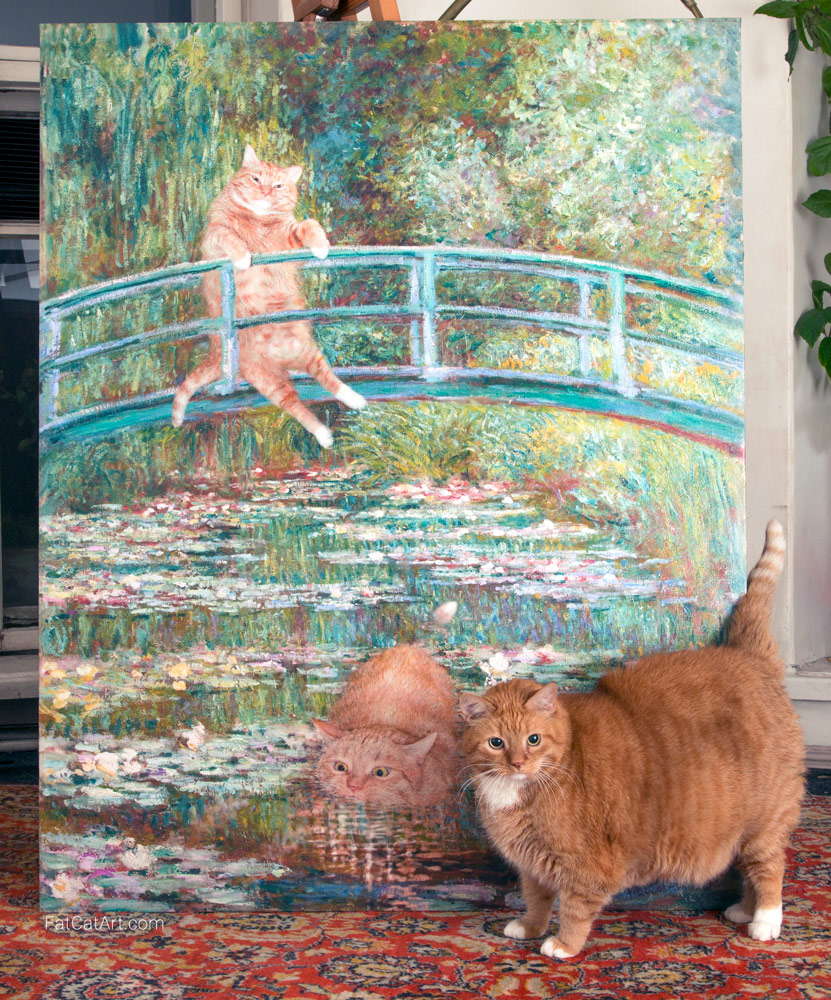 Zarathustra the Cat with his life-sized portrait by Claude Monet

He left me many paintings and even videos to finish, and I have to develop his legacy. I have thousands of his photos and video shots on my computer. He traveled in art history for centuries, and he will continue his journey in the digital world.
Thank you so much, dear friends, for your overwhelming support during Zarathustra’s illness on FB and IG; it helped me live during this hard time.

Thank you so much for touching words about my beautiful and clever kitty when he passed away. I received more than 10 000 comments and messages on our Facebook and Instagram.

Sorry, I couldn’t reply or even react to them all; I was absolutely broken, but I read them, and they gave me such a heartwarming consolation.

I just quote a message from Quirky the Blind Kitten that brought a lot of sweet tears to me: “Z is doing very well up here at the Rainbow Bridge. After I took his paw and walked him up the Rainbow Bridge Stairs, he decided to teach art to the older kitties! He loves working with them because he is so very creative. I am so sorry he had to arrive here, and he wants me to tell you how grateful he is that he got to be your kitty and teach him so much love…. I am so sorry… Love, Quirky….”

That is what Zarathustra should do, for sure.

I miss my kitty so much. But I should say Zarathustra will return in new paintings, just give him a little bit of time.

Hug you all, Svetlana, Zarathustra’s mom 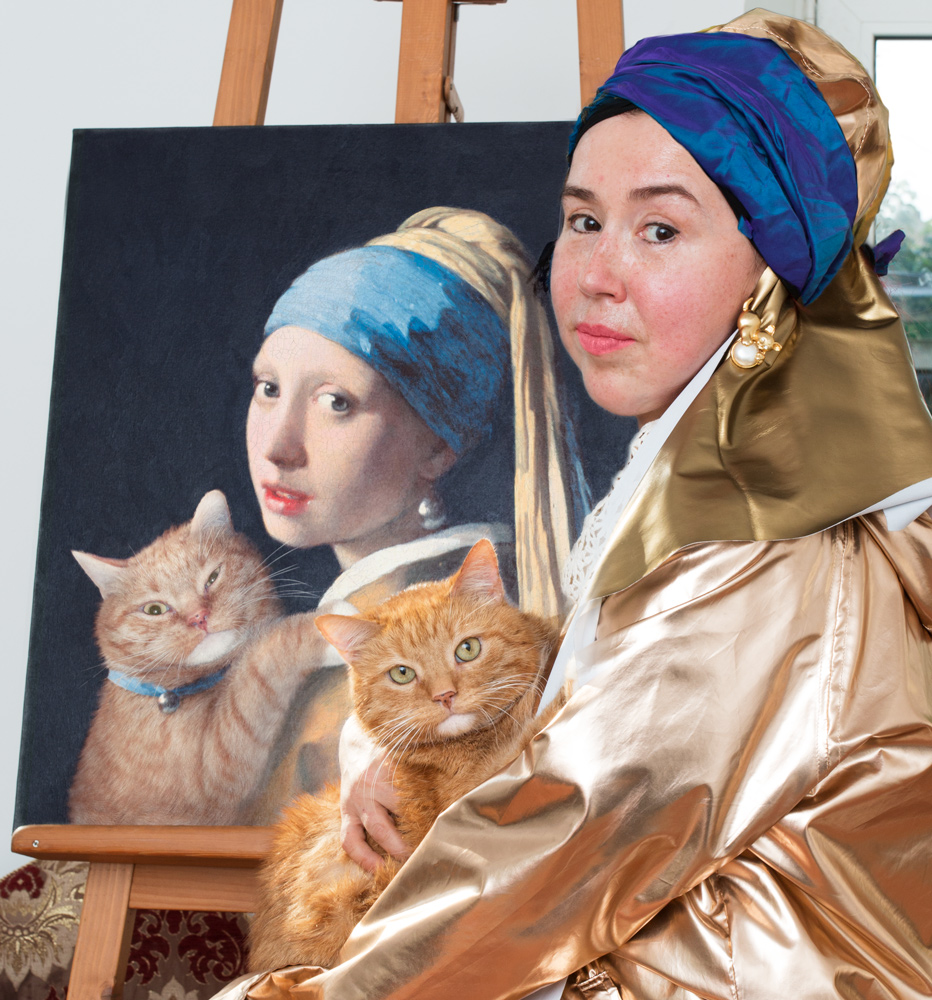