Venus and the Cat Hunting Birds

They say that We, Cats are natural-born killers. But don’t forget that humans introduced cats in their society because of cats hunting abilities, and now humans themselves took the mission of rats genocide by means of chemical weapon that is much more efficient than noble hunt. And now humans complain about cats! What hypocrisy!
The genius Lucas Cranach the Elder wisely depicted this controversy between cats hunting drive and misericordia to all living beings of their humans. Sometimes we should make a sacrifice if we’d like to live together: 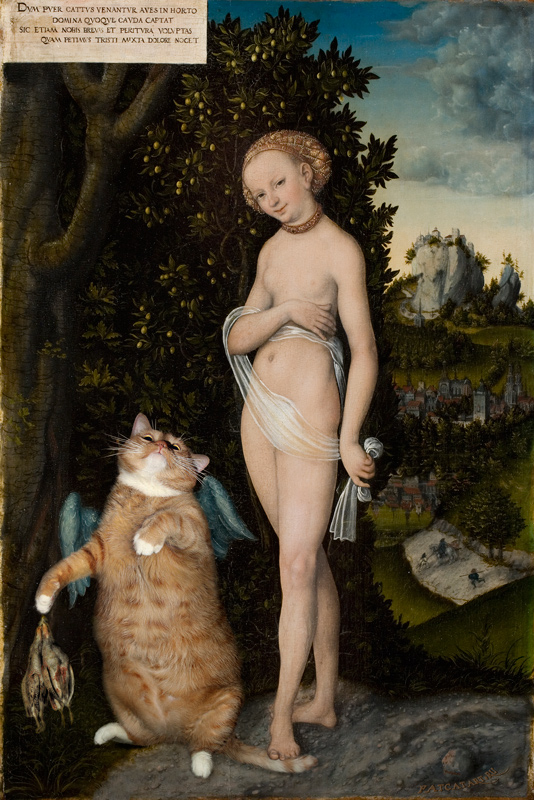 Lucas Cranach the Elder, Venus with the Cat Hunting Birds

The painting treats the ancient Greek poet Theocritus idyll “Cupid Stealing Honey”. Cupid complains to his mother, Venus, of how the bees sting him because he has stolen their hive. Venus replies that his own love arrows also hurts. You can have a look at the commonly known version of this painting (available  in high resolution at the site of Statens Museum for Kunst) : 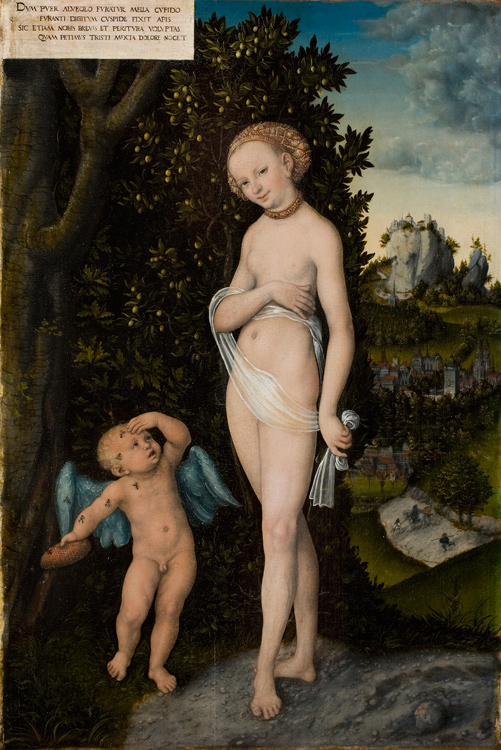 At the top of the painting, one can find Latin Theocritus quotation. At the process of the restoration of the original painting (at the beginning of the post) We discovered another interpretation of the theme of pleasure and payment for having it. Let us have a look at the Latin quotation there:

While boyish Cat hunted birds in the garden,
his human caught him by the tail
Thus too, the brief and passing pleasure that we seek,
ends in the Obesity Management diet.

For your sake, dear humans, We, Cats, refuse from hunting pleasures and scrunch dry food humbly. You should have respect!

We, Cats, as well as our humans, are not unanimous in the question should we completely refuse from hunting for the sake of doubtful theories of some ecologists or just for the sake of human misericordia to all living beings (We are full of respect to this feeling).

There is a moderate position between 2 opposits: a cat cannot kill birds, but can and must kill mice and rats. In the State Hermitage Museum in Russia one can found about 70 cats defending the museum collection from rodents:

We, for example, at the present time demonstrate our excellent hunting skills only on flies, to please Our human.