All humans worry a lot what their cats are doing when they stay alone at home.
To know what could be done, just check “Cat shaming” Internet meme that says a lot about feline fantasy in home alone entertainment.
But “shame” is a wrong word because cats, being masters of humans, can never feel remorse, and obedient humans should just accept them as they are and be happy.

Great artist Roy Lichtenstein though about this, creating his famous painting “Ohhh…Alright…”, wich appeared to be a diptych: 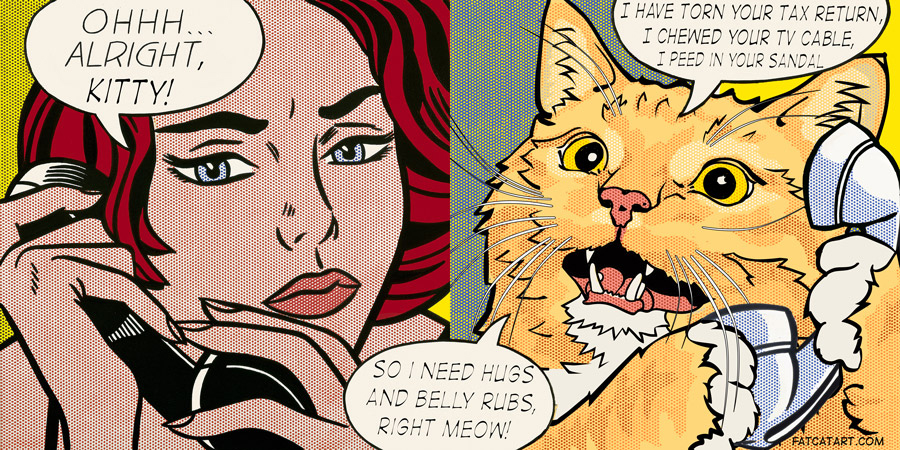 Now We kindly reveal the missing second part of it, depicting Us, Zarathustra, the Cat, calling to Our human, while she is away for some exhibition, and reporting about the innovations that We generously made at her house.

Now the meaning of the first part of the painting (by the way, sold at US $42.6 million at Christie’s in 2010 becomes clear. The girl hearing from her cat “I have torn your tax return, I chewed your TV cable, I peed in your sandle” just accepts her fate. She is ready to return home immediately and give to her sweet bandit a lot of hugs and belly rubs he deserves.

We humbly suggest this second part of the masterpiece to be sold at Christie’s at maybe $52,6 million (inflation, you know).

Christie’s, where are you? Don’t be shy to contact us!

P.S. We restored this piece thinking about Guillaume, Mark, and the divine providence
We purr to our friend Susan for her kind help in deciphering Our mewsings into English