A friend in need

Can cats and dogs be friends? In opposite to the common opinion, Cassius Marcellus Coolidge suggested his positive answer when he created the true version of his most famous painting from the “Dogs Playing Poker” series, “A Friend in Need” 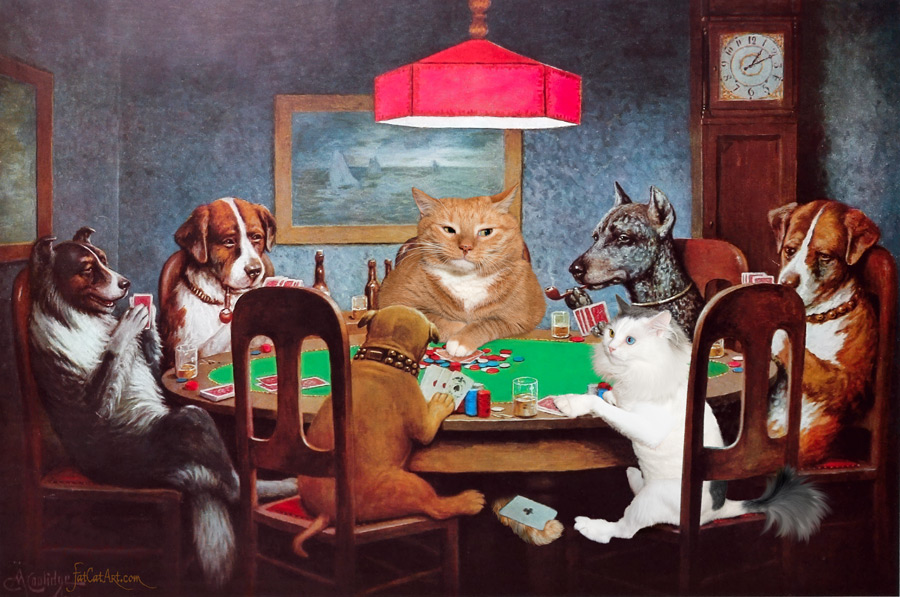 C.M. Coolidge, A Friend in Need, from Dogs and Cats Playing Poker

Also, We were so kind to help DB to pass the ace to the ginger puppy with Our noble tail. The legs of little ones were too short for the action

You may notice this gap at the commonly known version of the painting: 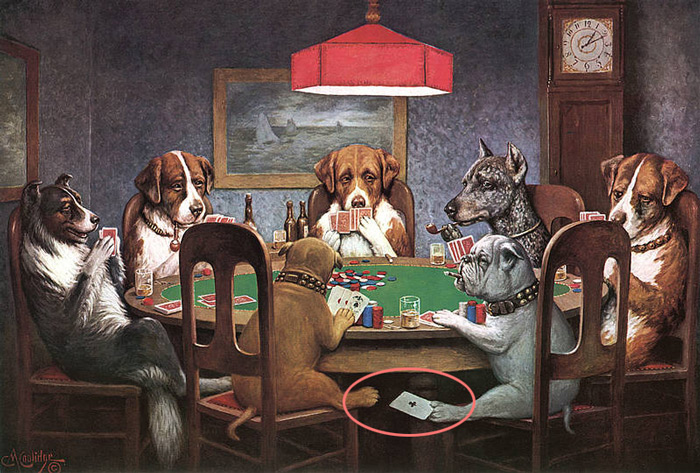 Now you see that a bulldog puppy cannot pass the ace to the ginger one, their legs are too short!

It is evidence that Our version is the true one!

Also, Coolidge’s wife and daughter were unimpressed by Dogs Playing Poker; they were cats persons! Our true version was created to please them

Not to mention of the widening of the “friend in need” notion:

A friend in need is a friend indeed! Species difference doesn’t matter for true friendship!

P.S. You may ask why you, Zarathustra, being so wise and enlightened cat, decided to improve a painting, that art-critics think to be the quintessence of kitsch?

You know, friends, “kitsch” is a word created by the thin layer of humans pretending to be very hi-brow, to humiliate popular art and augmente the meaning of things not understandable for the wide audience. But with centuries passed, you may see that this notion is just human, all too human: the most kitschy image in the history of art, the couple of cherubs, was painted by genius Raphael at his masterpiece Sistine Madonna!

So, We’ll see in some centuries in what category will hi-brow human art-critics put “Dogs playing poker”! Things already begin to change: in 2005, the originals of “A Bold Bluff ” and “Waterloo: Two” from the series were sold in Doyle New York’s Dogs in Art Auction for $590 400

You may also say: “The artwork was created for cigars promotion!”

Well, it was commissioned by a cigar manufacturer, but, you know, Borgias were famous art patrons and commissioned a lot of artworks, though they were a little bit more poisonous than cigars